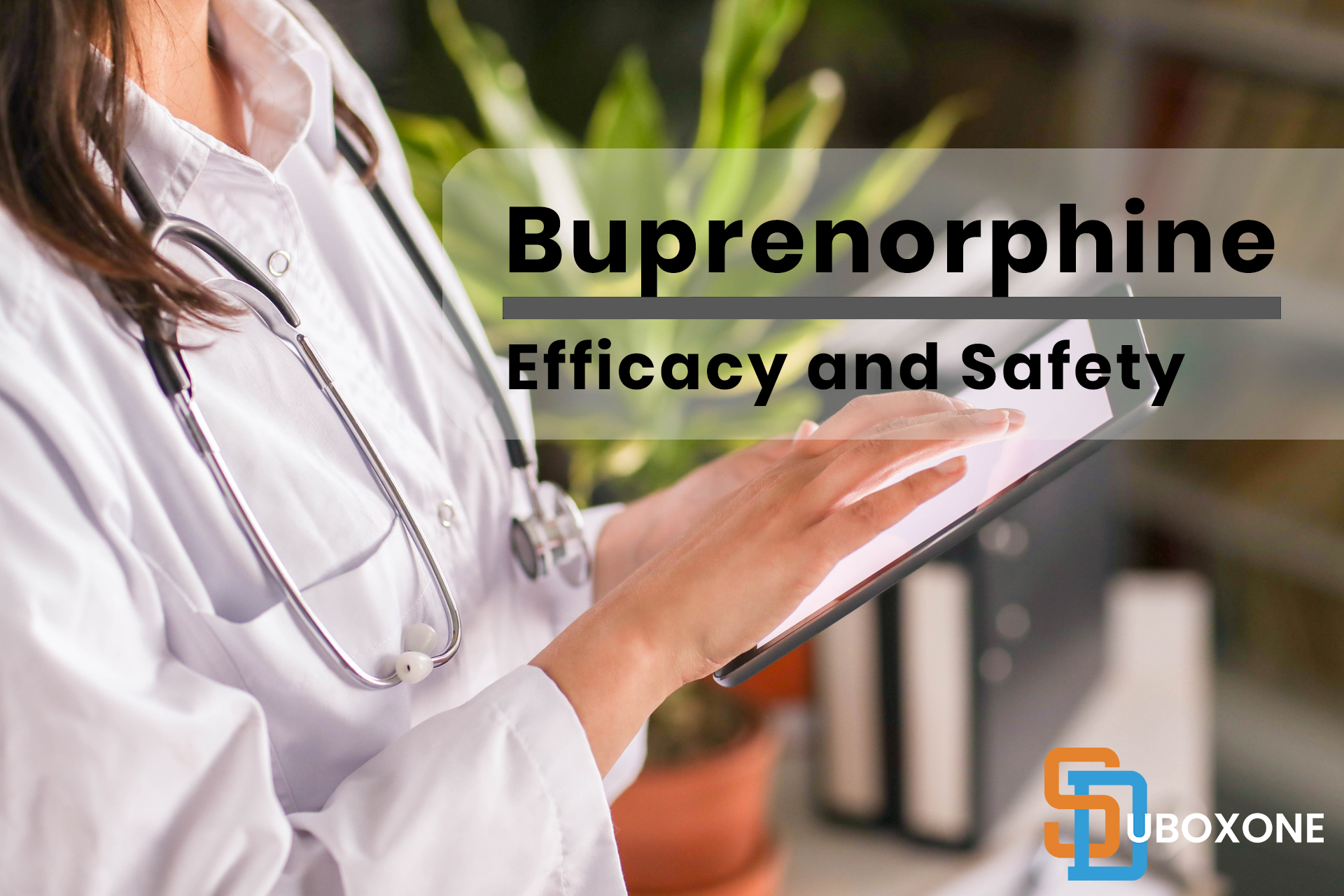 The Efficacy of Buprenorphine for Treating Opioid Use Disorder

Opioid use disorder affects over 26 million people[1] worldwide and is most common in North America.

So it’s safe to say that there’s no easy solution to treating opioid use disorder. Many people break the initial cycle and detox, only to relapse days, months, or years later. But, there are therapies and medications such as buprenorphine and suboxone for opioid use disorder.

Both therapy and medication increase the chances of staying sober long-term. Some options are more expensive and effective than others. So, it’s best to do your research first to understand which option will be most effective.

If you’re looking to understand the efficacy of buprenorphine and suboxone in medication-assisted treatment, then read on.

Opioid use disorder is a problematic pattern of opioid use that leads to significant impairment or distress. Many people develop dependency or addiction issues that originate from legal opioid prescriptions.

There are several opioids[2] that are available on prescription in the USA, these include:

Despite improving symptoms short term, these drugs are very addictive. Many people suffer from lasting effects after receiving a legal prescription.

Opioids are so addictive because they bind to areas of the brain that are involved in feeling pain and pleasure. Opioids block pain signals and release other hormones (dopamine) that help you feel happy.

America’s opioid crisis is so significant that lots of data and statistics are available. Some of the most shocking impacts of opioid use[3] are as follows:

The severity of the opioid misuse crisis is high, but emerging therapies and medications help. Although treatments do not always work the first time, buprenorphine for opioid use disorder has science to back it up.

Buprenorphine is one of the medications for opioid use disorder that is approved by the Food and Drug Administration (FDA).

You can only receive a buprenorphine prescription from a doctor. They must also put together a treatment plan that includes other forms of therapy.

If someone qualifies for a prescription, there are several types of buprenorphine available:

Each type of buprenorphine is appropriate in different circumstances. The managing doctor will decide which form of the drug to use on a case-to-case basis.

Many options above also contain naloxone. This is another form of medication for opioid addiction; the active ingredient is called suboxone. These medications work together to give someone the best chance of recovery.

Both buprenorphine and suboxone are partial opioid agonists and work as a maintenance treatment for addiction. They can be given separately or in a combined form.

If someone has an addiction to shorter-acting drugs, buprenorphine alone may be sufficient. However, for intravenous users, it’s more common to use a combination style medication.

Buprenorphine does have the potential for abuse, so it’s listed under Schedule III of the Controlled Substances Act. [4]

How Buprenorphine Works for Opioid Use Disorder

In simple terms, buprenorphine stimulates the same receptors as opioids. This means that they will have more feelings of well-being and fewer side effects while getting off drugs.

Because it’s acting on the same receptors, people will feel a minor dose of euphoria or well-being similar to the one they get from opioids. However, it’s a more controlled feeling, and it’s rare that patients become addicted to or dependent on buprenorphine.

Even if people develop a dependency on buprenorphine, they can taper off the medication regimen slowly, in a controlled way. Breaking any reliance on buprenorphine is significantly easier than trying to quit opioids without help from a professional.

In moderate doses, buprenorphine is safe and effective. But, if taken outside of a clinical setting, it can be abused. So, suboxone (the combination drug) is another option. Suboxone treatments contain buprenorphine, but the potential for abuse is less because it causes severe withdrawal symptoms if misused.

Before starting buprenorphine therapy, the patient mustn’t use opioids for 1-7 days. However, it’s essential that they talk to the doctor first because they need to begin treatment in the early stages of withdrawal.

If a patient still has opioids in their system or they aren’t experiencing any symptoms yet, buprenorphine shouldn’t be given because the risk of severe withdrawal is high.

After a while on buprenorphine, the person will begin to feel more stable. At this point, the doctor may adjust the dose. Buprenorphine is a long-acting drug, so some people switch over to alternate-day dosing.

However, every person is different, and they’ll have close contact with a doctor who can help determine the correct dosage.

What Is Medication-Assisted Treatment?

When someone visits the doctor with an infection, treatment is often simple. A packet of antibiotics, and away they go.

But opioid addiction is complex, to say the least; a prescription is not enough. For this reason, physicians must do a specialist addiction treatment course and are not allowed to treat more than 30 patients at a time.

Medication-Assisted Treatment is a combination of prescriptions to help physical symptoms and counseling to help the underlying issues. Most people with opioid addiction also have mental health problems, so additional support is vital.

In Medication-Assisted Treatment, buprenorphine can help with either detox, maintenance, or both. Although, if it’s used for detox, it must be done under full supervision in a clinical setting.

Safety Precautions and Side Effects

Because the burden of opioid addiction is so high, buprenorphine is safe for use by most people. But it’s vital that people do not mix any other substances with their prescription if the doctor does not approve it.

Where other treatments can’t be used in pregnancy, buprenorphine is the most appropriate medication for treating opioid use disorder. The risks of taking opioids in pregnancy outweigh any potential harm to the fetus.

As with any drug, there are some side effects to buprenorphine. But, added to this are the withdrawal symptoms from coming off opioids.

Buprenorphine helps people have a smoother transition to sobriety, but the most common side effects are as follows:

These side effects can be unpleasant, but patients speak with a doctor at any point. Once the initial stages of treatment are over, people notice fewer side effects.

If someone experiences severe side effects, it may be due to an allergy or a drug interaction.

More serious side effects include:

If someone has an extreme reaction to buprenorphine, the doctor will check to see whether the treatment is still suitable. It may be that it’s drug withdrawal that is causing the symptoms rather than buprenorphine.

Either way, the doctor will review medication and dosage in this instance.

How Effective Is Buprenorphine?

As the opioid crisis comes to light, more research is published regularly on the best way to treat addicts.

Medications as a treatment have proven effective. However, physicians often lack the training to provide the support needed during a sobriety journey. This is where medication-assisted treatment/therapy becomes critical.

Buprenorphine is one of the favored choices for treating opioid addiction for several reasons:

The emerging evidence shows that buprenorphine is effective for helping detox and as maintenance therapy.

There is lots of evidence for the use of buprenorphine. Below are the summaries of three recent pieces of evidence that are helping shape clinical practice. Each of these papers shows a different angle towards the treatment of opioid use disorder.

The study compared how effective both drugs were in teenagers going through opioid withdrawal. There were 36 subjects assigned to either buprenorphine or clonidine groups – but they didn’t know which group they were in.

The healthcare professionals used the Clinical Opiate Withdrawal Scale to measure their symptoms on days one, two, three, seven, and fourteen.

The results show that the group on buprenorphine had fewer withdrawal symptoms than the control group and the group on clonidine.

They concluded that buprenorphine was the more effective medication to help with opiate detox.

Shulman, Wai, and Nunes (2019) identified the need for more research into buprenorphine. These researchers reviewed the existing evidence and compiled it into one paper that shows the different ways buprenorphine is used.

They found that buprenorphine is always effective compared to placebo drugs and naltrexone and similar to methadone. They found that the rate of success (addicts staying sober) was around 50% after six months across all studies. [6]

This shows the importance of supporting people with opioid use disorder long-term and providing the comprehensive therapy they need.

Ayanga, Shorter and Kosten (2016) published a medical update on the use of pharmacotherapy for the treatment of opioid use disorder.

They highlighted that there are several different options for treating opioid use disorder, but despite that, it’s still a burden. Therefore, the options available aren’t working as well as they should.

The review concluded that buprenorphine treatment is the ‘gold standard,’ but there is also a place for introducing naltrexone for long-term use. [7]

These researchers stated that more investigation is needed into the behavioral aspects of recovering from opioid addiction as well as the medication intervention.

How to Get the Best Treatment for Opioid Use Disorder

If opioid use disorder were easy to treat, there would be no opioid crisis. That’s why it’s critical that people get treatment at the right time, in a way that works for them.

Many addicts will resist treatment to start, and that’s difficult for loved ones to accept. However, it’s part of the process, and the important thing is to act fast when the person is ready to accept help.

At San Diego Suboxone, we’re available to talk 24/7 whenever someone needs assistance. Our dedicated facility helps people recover from drug addiction every day.

Whether it’s medical detox or pain management treatment that’s needed, our physicians are trained to make the transition to sobriety as painless as possible.

We offer various treatments (suboxone, sublocade injections, and buprenorphine) and will always have a doctor on hand to help out.

People with opioid use disorder are encouraged to play an active part in learning about their treatment plan. But, all the big decisions can be left to the doctor if need be.

Get Sober With Buprenorphine

There’s an in-depth guide to buprenorphine for treating opioid use disorder. It’s a big topic, and there’s a lot to take in, so don’t worry if you need to do more research.

However, the scientific evidence is conclusive that buprenorphine in medication-assisted treatment is good for long-term sobriety.

Whether it’s yourself or a loved one who needs some help, San Diego Suboxone will give you the time, attention, and medical expertise required to treat this disorder.

If you’re ready to take the plunge and get on the way to a better life, contact us today, and we can talk about the best way to help.